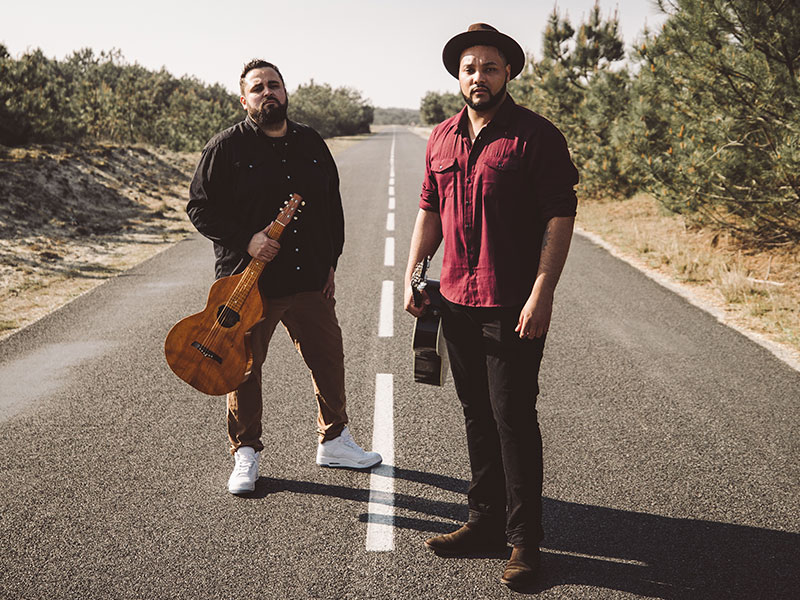 Franck & Damien met five years ago on a road of Bordeaux (South West of France), where they come from. A strange encounter between a hitchhiker and a driver, both traveling with their instruments. As the two musicians shared the same interest for guitars and had the same folk rock influences such as Ben Harper, John Mayer, Jack Johnson, Donavon Frankenreiter, John Butler Trio, Xavier Rudd, they decided to meet regularly to play together. Their artistic complicity and their desire to share their music pushed them to start a professional project at the beginning of summer 2017. They first started to look for places and dates in their surrounding area to meet their public. The success was immediate with more than 60 concerts in 4 months, marking the beginning of a long list of shows in 2018 and 2019.

Franck & Damien offer an intense live experience combining original songs and covers of Ben Harper, John Mayer, The Rolling Stones, Dire Straits, George Ezra. Franck’s smooth and warm voice mixed with Damien’s slide guitar and energetic and animated percussions, offers a journey to North American sounds. Their complicity on stage is very communicative with the public, French or international. The audience is won over and comes back regularly to see the band play live.
The band got the chance to play on big French festivals like Garorock and Reggae Sun Ska. They also had the pleasure to open for Laurent Lamarca, Donavon Frankenreiter, Toure Kunda and Nahko And Medicine For The People. Well-known by professionals and also voted by the audience, the duet won a contest with Virgin Radio (french radio) which gave them the opportunity to play with the french band Cats on Trees.

The recording of their first studio album occurred at the end of 2018. The mastering was made by Matt Grundy, friend of the band, experienced musician and Donavon Frankenreiter’s bassist. The album “You Can Find Your Way” has been released on November 8th, 2019.