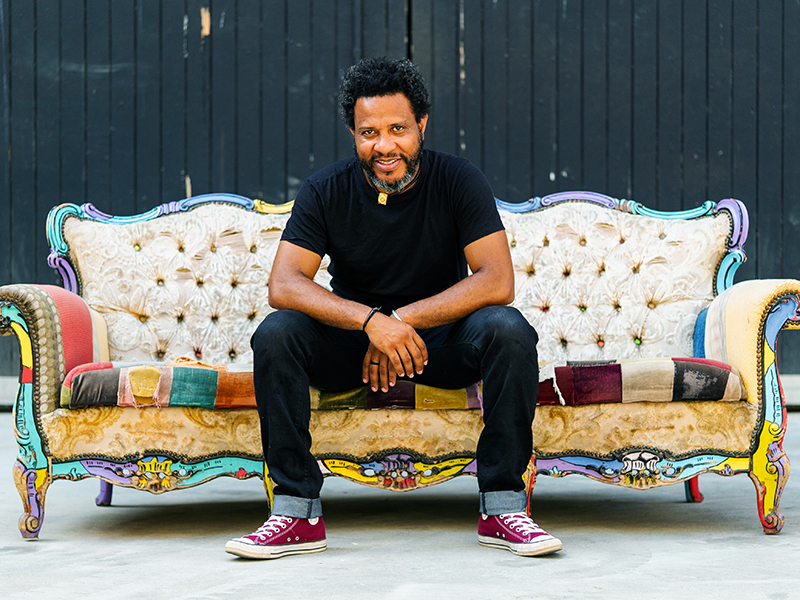 Comoros are a testimony of the strong cultural identity insularity can create. They intertwine, in that archipelago on the spices route marred by slavery, languages, cultures, rites and musics. These 4 islands have been shaped by various influences: arabic, persian, african, french, indonesian thus representing a true conservatory of cultural interbreeding. Despite all this, itʼs a necessity to be on the world pulse, which is not easy, and in the Babel of sono create oneʼs own story.

This is the way chosen by Eliasse, through his experience gained at first with his folk band, then with that of the singer Maalesh, from palship or collaborations (as a percussionist or a chorus singer) with Baco, Mikidache, M’Toro Chamou, Nawal, until he took his flight with a first album “Marahaba“ in 2008.

So, when you listen to him, faithful to his natural curiosity, you get the impression that he has been nurtured by a puzzle of imaginary musics. Heritages that have been enriched by soufi rites, lineage songs, secular celebrations, traditional musics and dances, feelings, satires, legends and myths. As well, is he able, from the web of local ternary rythms (twaraba, mgodro, shigoma, sérebwalolo…), to graft cuttings with occidental binary rythms (blues, funk, rock). Or like his meandering through native dialects seasoned with french, English, Malagasy and Swahili. A wide range of approaches combined with a musical repertoire mixing poetical metaphors and opinions makes the Moroni born singer someone unique enough, we would say committed to the city, but who prefers to consider himself simply as “conscious”. A singer bringing fresh air and downright innovation around Indian Ocean but still showing a deep commitment in the musical story of the pioneers of the 70th when the moon islands were standing out for emancipation.

As proof this album, collection of hit songs. A repertoire he conducts with his guitar and his merlin (kind of dulcimer) and two accomplices: Jérémy Ortal on the bass (Shaolin Temple Defenders, Martha High) and Fred Girard on drums (Sleeppers, Bertrand Cantat, Afrobeat Crusaders). He raises the subject, from different angles, of the archipelago difficult situation, its endemic troubles and drama such as the drowning of the applicants to kwassas, those dilapidated boats boarded by immigrants. Thatʼs the way his “TwaraBlues“ rises up against the fate of paid culprit, wishing everybody to put its own house in order and hoping for a better future for all. Like the song “Endra” telling of a woman who bore many children but still doesn’t know what love is and hopes that the next man will be the good one. A song, in fine, directly related to Comoros. Or yet this independence flower “Ylang-Langue” wilted before flowering.

Now Eliasse is going to share this new repertoire on European stages. For those who didnʼt see him recently opening for Groundation, mythical reggae band, it is an opportunity to discover an artist sunny and altruistic, whose benevolence and humor are the reflection of these islands adorned by dreams and tales.